How Your Dentist Knows You’re Not Flossing 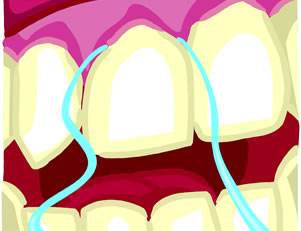 Are you one of those people who right before your dental check up brush and floss the heck out of your teeth? Well, the dentist can tell when you are not flossing and brushing, despite your best last minute effort. Read on to learn more, and thanks for visiting us at Personal Endodontics of Troy, MI.

A recent survey by the American Dental Association found that just under half of all Americans floss their teeth daily.

What about the other half?

My guess is that they’re the ones who floss twice a year — right before their dental checkups.  They think they can pull a fast one on us, but here’s a little secret: dentists can tell when you’ve been  flossing and when you haven’t.

How Dentists Can Tell When You’re Not Flossing

The way we can tell if you’re not flossing is if your gums are bleeding.  Although there are other, less common conditions that can make your gums bleed, gingivitis is the main cause.  Gingivitis is when the gums are inflamed due to all of the bacteria in your mouth collecting right between the gums and the teeth.

The problem is that it takes about a week of daily flossing for gingivitis to go away and make it so your gums don’t bleed when they are cleaned.

The most authoritative book on the gums — that’s 1,328 pages dedicated to your gums! — states the following:

So, if you end up brushing and flossing really well right before your dental cleaning and exam, your teeth will be clean, but your gums will still show the main sign of inflammation: bleeding.

If you really want to trick your dentist into thinking you’re brushing and flossing regularly, you’ll have to do it for at least seven days before your visit. And if you’re gonna do that, why not simply brush and floss every day?